Prime Minister Narendra Modi unveiled the logo, theme, and website of India’s G20 Presidency via video-conferencing on Tuesday, saying that ‘Vasudhaiv Kutumbakam’ is the signature of India’s compassion to the world, and the lotus represents India’s cultural heritage and faith in bringing the world together. Speaking on the occasion, the Prime Minister stated that India has led the world in renewable energy conservation through initiatives such as One Sun, One World, and One Grid.PM Modi said, “Our mantra of One Earth, One Family, One Future in G20 will pave a path for global welfare”.

The Prime Minister said India is set to assume G20 Presidency and it is a moment of pride for 130 crore Indians. PM Modi said, “I congratulate countrymen on the historic occasion of India’s G20 Presidency. ‘Vasudhaiv Kutumbakam’ is the signature of India’s compassion for the world. Lotus portrays India’s cultural heritage and faith in bringing the world together”.

The Prime Minister said that after Independence, India commenced a journey to the heights of development and it includes the efforts of all the governments in the last 75 years. PM Modi said, “Every government and citizen have put in the efforts to take India forward”. Noting the disruptive after-effects of the COVID-19 pandemic, he said that the symbol of the G20 logo is the representation of hope.

PM Modi said, “No matter how adverse the circumstances, the Lotus still blooms”. Elucidating the importance of the logo, the Prime Minister said that the seven petals of the Lotus represent seven continents of the globe and seven notes of music. G20 will bring the world together in harmony. Our aim is to reclaim Pakistan-occupied Kashmir: Raj...

Union Defence Minister Rajnath Singh on Thursday said the Centre’s aim is to implement the resolution unanimously passed i... 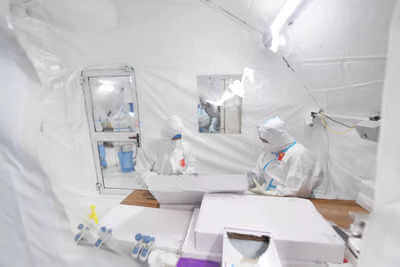 China puts Lanzhou city under lockdown amid surge in...

Nagpur: Due to a surge in Covid-19 cases, China has placed Lanzhou city with a population of over four million in strict l...